■ 375 North Korean defectors living in South Korea were interviewed during the first two years of research by the Transitional Justice Working Group (TJWG), to create a digital map of crimes against humanity in North Korea 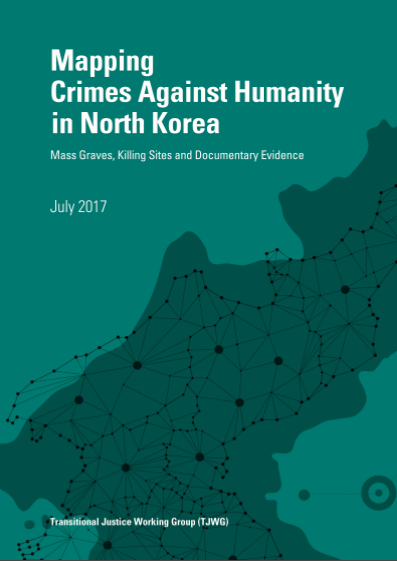 For the last two years, the Seoul-based Transitional Justice Working Group (TJWG) has been using Google Earth satellite images in interviews with 375 North Korean defectors to build a digital map of crimes against humanity in North Korea.

Grave sites, killing sites and government offices that may store documentary evidence linked to human rights crimes have been targeted for investigation in the first research of this kind on North Korea.

The findings may be used for future investigation and prosecution of crimes against humanity.

The most common site identified was killing sites by shooting at 290, prior to consolidation to account for multiple mentions of the same site. While our research corroborates reports that killings by hanging all but ended in the mid-2000s, 30 mentions were made of hanging sites by the interviewees prior to that time. Our research supports existing reports stating that the greatest number of public executions occurred between 1994 and 2000, when food shortages were at their most severe.

The 375 North Korean participants also identified 47 possible ‘body’ sites, including cremation sites and crude burials in remote areas. These sites are often close to detention facilities and labour camps. Some of these sites are thought to contain 10-15 bodies together. Our findings showed instances where over 4 dozen dozen killing sites were independently identified as being within 4 kilometers of a suspected burial site.

The majority of burial and killing sites identified were in North Hamgyong Province, which borders China. Of the 375 people interviewed, 221 came from this province. Further research is needed to identify clearer patterns in the distribution of the sites throughout the country; however, public executions and arbitrary killings appear to take place nationwide.

At present the contents of the map cannot be disclosed fully: evidence at sensitive sites such as burial and killing sites may be tampered with by the North Korean regime if their whereabouts are made public. However, locations of non-sensitive sites such as police stations and local courts containing documentary evidence about deaths and information relating to these events are published in the report.

The Mapping Project was initiated in the wake of the United Nations Commission of Inquiry on Human Rights in North Korea (UN COI), in response to the subsequent call for accountability for perpetrators of human rights abuses. Incident-based human rights documentation has been taking place in South Korean civil society for some time. However, this is the first project focussed specifically on mapping coordinates where evidence of these abuses may be located.

Although individual narrative accounts of human rights abuses are a critical part of creating a record of crimes against humanity, location-based data plays a vital role in complementing such accounts with physical evidence, while also developing digital maps to visualise patterns of abuse that have taken place over decades.

Such evidence is important for supporting any future criminal justice proceedings against perpetrators of human rights abuses in North Korea. But it is also essential for connecting families with the remains of loved ones who may have disappeared or been killed and buried in unknown locations by agents of the state. As the experience of the Former Yugoslavia, Cambodia, and a number of other countries recovering from past atrocities shows, locating and documenting the contents of such sites is also vital to the creation of an accurate historical record.

The use of satellite imagery to map locations of killings and grave sites has been applied in other geographical settings including in the Darfur region of Sudan, and in Cambodia ? home of the notorious “Killing Fields” containing over 1.3 million dead at the hands of the Khmer Rouge, across 20,000 mass grave sites.

Mapping grave sites and killing sites is also an important part of the work of civil society groups focussed on countries where access to the locations is difficult or impossible, such as Iran and North Korea. In recognition of the demand for remote sensing technologies to overcome access problems, university projects in the UK and US are developing advanced technologies which may make it easier to remotely detect and analyse sites containing human remains and other evidence linked to both victims and perpetrators.

Gathering as much information as possible about such sites ahead of gaining access to the ground is important for preparing first responders such as NGOs, forensic archaeologists and state-appointed investigators for what they may encounter. It is also vital for minimising damage to scenes of crimes that will need to be catalogued properly if evidence is to be used in future criminal justice proceedings.

The report also presents the results of a survey of the North Korean defector research participants, which shows strong support (79.4%) for future exhumation of burial sites and investigation of human rights crimes in North Korea. Other key findings:

■ Main reasons why exhumations were seen as necessary were: to gather evidence to assist in the prosecution of perpetrators of human rights abuses; to ensure the truth is told about the scale of deaths under the regime; and to help the relatives of victims recover from the loss of loved ones.

■ 94.8% said it is important for perpetrators of human rights abuses to receive prosecution and punishment in a court.

■ 82.1% said it is important for victims of human rights abuses to receive financial reparations post-transition in North Korea

Transitional Justice Working Group is a Seoul-based, non-governmental organisation founded by human rights advocates and researchers from five countries in 2014. It is the first Korea-based NGO focussed on transitional justice mechanisms in the world’s most oppressive regimes, including North Korea. We aim to develop practical methods for addressing massive human rights violations and advocating justice for victims and societies that are transitioning from a situation of conflict or oppressive government. We seek to build bridges between individuals and groups sharing a common commitment to the principles of democracy and self determination, of peaceful and consensual conflict resolution, and of justice in pre- and post-transition societies. We collaborate and share our practices with other organsiations and individuals concerned with the pursuit of accountability for mass atrocities and human rights abuses. Our first project is the Mapping Project, featured in the present report. We also run training conferences and workshops on human rights documentation methods and technologies, and advances in transitional justice theory and practice worldwide.
목록보기 이전 다음