■ 75.4 percent had direct or indirect experience of state violence; 84.6 percent identified themselves as victims of the regime 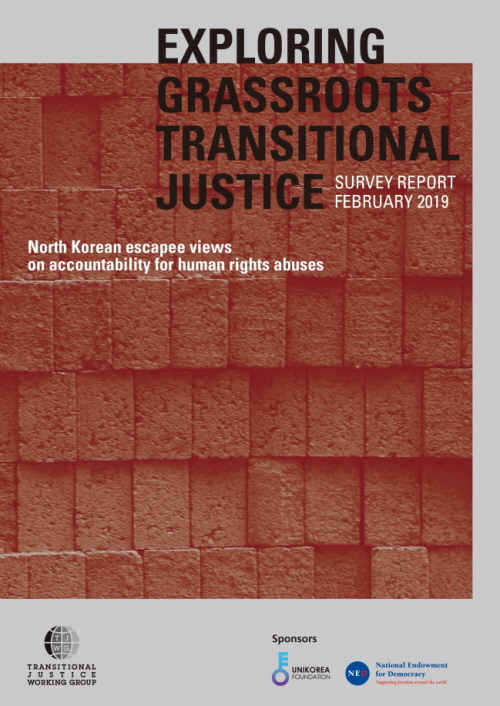 The Transitional Justice Working Group is proud to present "Exploring Grassroots Transitional Justice: North Korean Escapee Views on Accountability for Human Rights Abuses", a report based on a survey of 451 North Korean escapees over four years (2015-2018), along with 10 in-depth interviews. The report will be formally released at a briefing session on Tuesday, February 26, 2019, 2:00-4:30 p.m. in Seoul on the eve of the scheduled Hanoi summit between North Korean leader Kim Jong-Un and US President Donald Trump.

Hard copies of the report will be distributed at the briefing session on February 26, and sent to over 300 stakeholders, including 130 diplomatic missions and the Office of the High Commissioner for Human Rights (OHCHR) in Seoul, NGOs, research institutes and universities. To download online copies, please visit https://en.tjwg.org/TJWG_Survey_Report-Exploring_Grassroots_Transitional_Justice_North_Korean_Escapee_Views(February2019)-Eng.pdf

The key findings of the report include:

■ 47.7 percent of the participants had personal experience of physical violence perpetrated by the North Korean authorities. 75.4 percent had experienced physical violence or the death of close family members by execution or starvation, forced repatriation, arrest or detention.

■ 84.6 percent identified themselves as victims of the North Korean regime, citing not only bodily harm as a source of victimisation, but also discrimination due to the hereditary songbun class system, or the lack of freedom to contact their remaining family members in North Korea.

■ Regarding the primary mechanisms of transitional justice that might be applied in a post-authoritarian North Korea, financial compensation was considered very important by 70.1 percent; criminal prosecutions by 75.8 percent; official apologies by 76.9 percent; and non-judicial truth-telling by 82.9 percent. Also, 91.5 percent favored the exhumation of mass burial sites.

■ Regarding the type of court for that might be established to prosecute perpetrators of human rights abuses, 45.9 percent of the survey respondents expressed preference for an international court in Korea; two of the interviewees stated that Korean courts with Korean judges would lack objectivity, suggesting that Korean judges would view the North Korean perpetrators as ethnic "brethren". 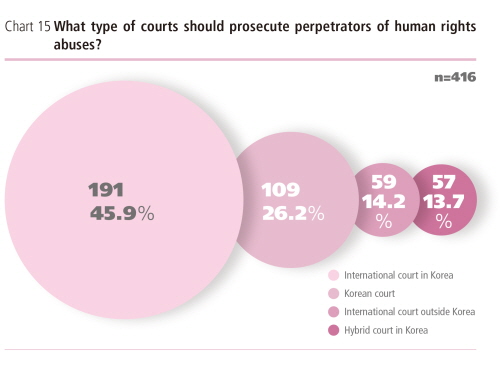 ■ A number of participants suggested that focusing prosecutions on those deemed “most responsible” would be a viable judicial option without overwhelming the system.

■ 76.7 percent considered that having victims lead and design a transitional justice process would be very important.

■ The report coincides with the fifth anniversary of the publication of the report of the UN Commission of Inquiry (COI) on Human Rights in the DPRK in 2014, which called for accountability for crimes against humanity in North Korea.

The report’s main author Dr. Sarah Son, Research Director at TJWG said, “We have a crucial opportunity to begin planning for North Korea’s future now. Dealing with a legacy of human rights abuses is a huge challenge that will need to be faced, but it has been overlooked for too long.”

“The experiences of other countries tell us that victims of human rights abuses don’t speak about rights as much as needs. It’s important that we find out their needs and look at ways of addressing these needs now, in preparation for a future political change in North Korea.”

“84.1% of our research participants said they fear participating in human rights work focussed on North Korea. It’s important that we create an environment where they feel safe to share their views.”

“Although the findings here cannot be seen as representative of the views of the North Korean population as a whole, we see it as an important first step in finding out more about how we can be planning for North Korea’s future.”

TJWG’s Researcher, Dr. Hyerin Yang, will also discuss her research on how North Korean adolescent refugees recover from traumatic events, in a presentation on “post-traumatic growth”. Exposing research of this nature is a vital part of learning more about how the experiences of the North Korean population may shape their needs and the remedies to meet those needs in the future.

“Based on my research, I found that peer attachment, social support, and medical and emotional support services can facilitate post-traumatic growth.”

Transitional Justice Working Group (TJWG) is a Seoul-based, non-governmental organisation founded by human rights advocates and researchers from five countries in 2014. TJWG aims to pursue advanced methods for addressing grave human rights violations and advocating justice for victims in pre- and post-transition societies. Since July 2017, its first report titled “Mapping Crimes Against Humanity in North Korea: Mass Graves, Killing Sites and Documentary Evidence” has been highlighted globally by numerous international media outlets. A progress report on the Mapping Project will be released in early May this year.
목록보기 이전 다음